Nevil’s View on Love and Marriage
Welcome! Thank you so much for coming. I’m Nevil, and this gorgeous man on the couch next to me is Shelton. *Shelton waves but lets Nevil continue.
First off, I’d like to thank Alyssa for having us on her lovely blog today. Isn’t it pretty? And some of those pictures! *smacks lips together
*Shelton raises a brow and leans forward: Just ignore Nevil. He forgets how to behave in public. Please, sit down. Coffee? Iced tea? *He gets up to fetch the drinks
*Nevil moves closer and winks: Good, now we can talk. Love and marriage? Well, I can chat all day about love. Before I met my lovely Shelton, I was perfectly content with being single. I’d meet up with friends, have a few drinks, and occasionally spend the night if we were both interested. I certainly wasn’t looking for anything long term. Commitment? Why?
But two years ago my architectural firm renovated the bank where Shelton was working at the time. I caught one heated glance from those gorgeous hazel eyes and I was hooked without even knowing it.
Of course I struggled, keeping Shelton at arms length. I’d definitely sleep with him, but no way was I going to give up my freedom and be trapped into some pointless relationship. But somehow Shelton’s gentleness and sweet nature and overall sexiness wormed their way into my heart. I’d have been a fool to throw away the best thing that had ever happened to me: Shelton’s love.
So here we are, two years later, still in a committed, wonderful relationship despite the bumps along the way. But now Shelton is talking about marriage. My first instinct is to run away like hell! Why would I want to bind myself up with chains society doesn’t even recognize? Shelton knows I love him. That should be enough.
It came to me slowly, but I finally realized that marriage means different things to different people. To me it had always been a pretty pointless ceremony. But to Shelton, with his warm and generous heart… *Nevil blushes: He says he loves me and wants to share that joy with all our family and friends. How can I deny him that?
*Shelton returns and Nevil pulls him down beside him: I was telling them about my thoughts on marriage. How does this December sound to you?
*Shelton blinks, then hides his face against Nevil’s shoulder. Nevil laughs: I’ll take that as a yes!
Prize time! Okay, as a thank you for listening to me ramble on, I’d like to give a PDF copy of ‘Shelton’s Homecoming’ to one of our commenters. Don’t forget to leave your contact information! 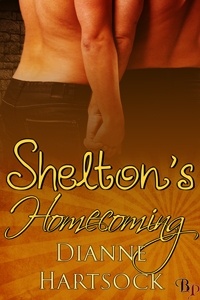 Shelton’s Homecoming
Breathless Press: http://www.breathlesspress.com/index.php?main_page=product_free_shipping_info&cPath=1&products_id=159
Shelton’s grown tired of living a life separate from Nevil. So when Nevil is hurt in an accident at work, Shelton comes home for good. Feeling closer than ever to his lover, Shelton’s ready to make a lasting commitment to their relationship. But is that what Nevil wants? Nevil is less than enthusiastic when an old flame marries, leaving Shelton wondering if he’ll have to keep his dreams on hold indefinitely.
Excerpt:
Shelton’s anger melted away when Nevil’s thumb touched his lips. He teased his lips open and then leaned in to brush his mouth over Shelton’s. “Come here,” he murmured. He pulled Shelton toward the building behind them. Shelton didn’t care where they went—anywhere, as long as he could still kiss Nevil.
Nevil pulled a ring of keys from a pocket, and let them in the front entrance of the abandoned office building. He locked the door behind them, and urged Shelton through a door on the right, latching that one as well. A quick glance around the room showed Shelton a desk littered with drawings and several vacant chairs. Nevil’s hand went around the back of his neck and pulled him into a kiss that left him shaky.
God, yes! Shelton devoured Nevil’s mouth. Their tongues fenced and twined as Shelton sucked on the moist sweetness within. His senses ignited. His need for Nevil became an almost animalistic lust. This was more than love. He needed to join with his lover, tangled in a celebration of life.
His fingers dropped to Nevil’s zipper and in seconds his hand wrapped around his sleek, hard cock. His moan echoed Nevil’s. Shelton’s dick thrust forward at a tug on the buttons of his jeans. He slid his free hand up Nevil’s back and urged him closer as he tried to deepen their kiss.
Nevil tore his lips from Shelton’s. “Goddamn, Shelton. Help me!”
Shelton blinked, dazed with want, and took in Nevil’s flushed cheeks; his eyes blazed with lust and frustration.
“Sorry,” he mumbled. He took tight hold of his abandoned senses. With care, he lifted the sling over Nevil’s dark head, and helped him out of his coat. He tossed it aside and made Nevil put the sling back on.
“You’ll only try to use it otherwise,” he said, distracted by the buttons on Nevil’s shirt. He undid them one by one; Nevil’s chest heaved as his tongue followed his fingers down his sweat glistened muscles. He became lost in the salty taste and seething skin as he inhaled Nevil’s erotic scent. He found a hard bud and bit it, gently, then soothed it with his tongue.
His mouth traveled lower to follow the sexy line of dark hair to Nevil’s open fly. Pre-cum leaked from the delicious mushroomed head of Nevil’s dick. He knelt to lick at it and slipped his hands inside to cup Nevil’s tight ass. He nudged the slacks down over muscular legs and slid off his shoes.
Nevil shuddered under his touch and Shelton grinned in triumph around Nevil’s cock as he sucked on the end of him. Easing back, he drew his tongue along the thick vein that ran under the hard shaft, and buried his nose in Nevil’s tight sac. He breathed in the heated, musky scent and his head swam. He grazed his teeth along the delicious cock that could give him so much pleasure.
Nevil’s fingers threaded in his curls and urged Shelton to his feet; their lips met in a sensual kiss.
“Undress for me, baby,” Nevil whispered against his mouth. The roughness of his voice sent waves of anticipation through Shelton’s body.
Dianne Hartsock
Blog: http://diannehartsock.wordpress.com/
FB: http://www.facebook.com/diannehartsock
Twitter: http://twitter.com/#!/diannehartsock
Goodreads: http://www.goodreads.com/author/show/4850270.Dianne_Hartsock