Today Elodie is talking about her hot new Evernight Publishing release, Night of the Horse

A lonely young woman signs up for dance lessons. Two gorgeous guys find her as fascinating as she finds them. On the country road where she lives, she hears horses in the night, and opens her bedroom window to watch them gallop. They’re beautiful, a silver white horse and tall black horse…they turn to stare at her. Had they heard and understood when she sighed over them?

Rosie would you like to tell the readers about how you and Justin met?

I was on the high street in the town where I live, and saw a poster advertising dance classes, so I inquired. It was the best thing I ever did. I met Justin in the shop where they were enrolling people. I was so attracted to him right away. You liked me too didn’t you Justin I could tell by the way you looked at me with your gorgeous brown eyes?

I loved you right away, but then I’d seen you long before you came into the shop. You didn’t know that then of course.

Better not say much about that or it will be a spoiler. Let’s just say Justin and Jude have a mysterious secret.

True. We all met at that time. Jude, Rosie, and me. (he leans over and kisses her cheek)

Justin can you think of anything you would have liked to be different in the story?

Justin: No I like the way the story unfolds and lets you see how we fell in love and why. I think Jude wanted more sex in the story, but seriously, it’s already loaded. I really like the way I get to make love to Rosie first. I love the ending don’t you darlin’? (grabs Rosie’s hand and sucks fingertips)

I do love the ending, because it’s so happy, although I do very much like the love scene before the ending segment.

Me too. (Justin puts his arm around her shoulders and Rosie kisses his ear. Now he’s holding her head with a handful of her hair and…now they are kissing…)

We are in public you two. How about telling the story?

(They stop kissing, but remain cuddled against each other. Justin is stroking Rosie’s neck. I’m ignoring it.)

I’d like a different name, maybe something more exotic.

Justin: No way. Rosie suits you because you’re lovely like a flower.

Justin tell us something about Rosie, how would you describe her in a few words?

Rosie: And you’re mine.

Rosie: He’s loving, he’s sexy, and surprising too. He’s creative, an artist. He teaches dance. He’s kind and generous. He’s gentle, wraps me up in a haze of lust…

Let’s just give the readers an excerpt to read and that way I can take you home to bed.

I think that might be a good idea. Thanks for coming along to the blog today…mmm maybe I should have said visiting the blog since you two can hardly keep your hands off each other.

Excerpt from ‘Night of the Horse’ 18+

They stopped only to breathe. Rosie unzipped his jeans and pushed them down. She trailed her fingers along to the front of his thighs. They were hard and muscled. Justin’s tongue pushed against her lips and opened her mouth. As his tongue slid against hers, she took hold of his cock. His erection felt huge and inviting.

He moved his hips, pushing into her hands and kissed her harder. Rosie went liquid, wanting to make love. Her panties were damp against her pussy as she stroked Justin’s cock. She wanted him so badly that when he stripped off her clothes, kissing her as he went she made soft whimpering sounds. He stepped back to take his jeans off, and watched her as she stood waiting for him.

As soon as he was naked, she leaped on him. He laughed as he caught her, and she put her legs around his hips. He kissed her mouth.

“You’re lovely, so sexy.” His voice low, he kissed her again before walking her into the lounge room. He sat down on her sofa and Rosie straddled him. He smiled and kissed her, pulling her up by her hips until she knelt, her legs on either side of his thighs. He stroked his knuckles along her pussy as his tongue slid against hers in another devastating kiss. Then he put a finger into her and Rosie moaned. She pressed onto his hand and he smiled against her lips.

Elodie lives in Canterbury with her two dogs. She works in an antique shop by day and writes at night, loving the cloak of silent, darkness that descends on the rural countryside around her home.

She has also released titles as an individual indie author.

This week I have Sonia Hightower for Excerpt Tuesday. 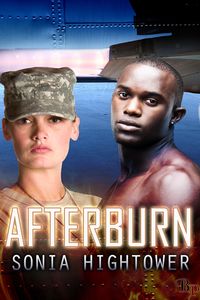 Their love burns hot, but will it stay fueled?
Crystal is an enlisted mechanic with a tragic past. Grant is an officer and a pilot with a broken heart. When faced with a difficult decision, will Crystal choose wisely or lose the best thing that ever happened to her?
The love between them burns hot, but their relationship won’t stay fueled if they can’t beat the obstacles that stand in their way. Besides breaking the fraternization rules, Grant and Crystal have the difference of race between them…but can they prove to the rest of the world, and to each other, that love is color blind?
Afterburn is about overcoming one’s past, not judging others, learning to forgive, and what it’s like to be a woman in a “man’s world.”
Excerpt
In one swift movement, Grant grasped her by her hips and flipped her onto her back, following her body with his own till he hovered over her. His dark eyes caught her lighter ones and stared into them intently. “Something clicked with you,” he said, his voice husky with emotion. “There’s just something there. I knew it from the moment you popped out from under that wheel well and banged your pretty head on that wing.” He traced a finger down her cheek. She felt a stirring within her. When his finger stopped at her lips, she pursed them and kissed the tip. Grant made a wistful sound, but apparently wasn’t going to be distracted. “I know with you, you won’t hurt me. You have been hurt, just like me, by other people in different ways. There’s a feeling of kinship right here.” He touched the left side of his chest, placing his hand over his heart.
“I feel it too,” Crystal whispered and, feeling a rush of desire for this man, this wondrous, kind-hearted, sexy man, she pulled his finger into her mouth. Her tongue and her eyes hinted at the other places her mouth would go, promising more to come. He replaced his finger with his mouth and, as their tongues mated, she used her body to coax him onto his back once more. She followed him, running her mouth down his neck and his chest, relishing the salty taste of his skin and the vibrations of his moans underneath her fingertips.
She had never felt this sexy, this wanted, this daring in her life. Sex in her past had consisted of awkward fumbling in the dark; heavy, sweaty grunting that ended in immediate snoring. Never before had she gone down on a man without being pressured or coaxed into doing so. Now, as she took his aroused cock in her mouth, she felt no shame, no embarrassment. She wanted to do it. As her tongue tasted him—the maleness, the muskiness, the saltiness that was the very essence of a man—her own juices began to flow again.
You can get your copy of Afterburn from Breathless Press, Amazon, ARe and Bookstrand.